WAR veterans will be forced to queue at Centrelink

WAR veterans will be forced to queue at Centrelink when the Department of Veterans Affairs closes its Frankston office next month.

A department spokesman, who declined to be named, confirmed the office would close on October 17 and its services would move to the Centrelink office in Davey St. Frankston Mayor Darrel Taylor, who served in the army for 16 years until 2012 said it was essential the department provided a service on the peninsula. 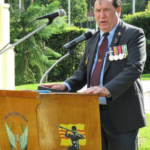